In 1587, when the Cremona native Claudio Monteverdi (1567–1643) offered his first book of madrigals for printing, the popularity of the genre of little vocal pieces had just reached its pinnacle. Such great madrigalists as Luca Marenzio or Philippe de Monte where among the most distinguished composers of the day, and Palestrina, the great master of counterpoint, he just published his second book of madrigals a year earlier. Three years later, Monteverdi was employed as a singer and violist at the court of Vincenzo Gonzaga in Mantua, and the compositions published in his second volume of madrigals immediately made him a rising star among the Italian masters. Without exaggeration, we can call madrigals like Non si levava ancor or Ecco mormorar l’onde the hits of their day. In them, Monteverdi exhibits a highly advanced use of imitation and counterpoint by Italian standards, and he is innovative in his treatment of tone painting and in his a keen feeling for sustaining a dramatic arch extending above the individual compositions.

In the course of the third through the fifth books of madrigals (1592-1605), we witness a gradual transformation of the composer’s style, which can serve in general as an interesting parallel to the development of music in the direction of Baroque aesthetics. This transformation is also connected with the choice of source texts. The smooth, refined sonnets of Petrarch or Tasso are gradually supplanted by passionate texts in the style of Mannerism, with the explicit expression of human emotion at the forefront. After 1600, Monteverdi became the maestro di capella at the court in Mantua, and he was also in charge of ostentatious secular celebrations accompanied by dramatic musical compositions. The crowning achievement of his creative work in this field is L’Orfeo (1605), which the composer called a favola in musica, i.e. a musical fairy tale, but after the fact, we now see it as the cornerstone of the operatic genre. Three years later, he completed L’Arianna (Ariadne), which has not been preserved as a whole, unfortunately, but according to period accounts it was at least the equal of L’Orfeo, and the only part of it that has been preserved, Arianna’s lamento Lasciatemi morire, is one of the most famous pieces in the great composer’s legacy.

Monteverdi’s dramatic works and his madrigals cannot be viewed separately. On the one hand, madrigals are an important component of his early operas, then on the other hand his madrigals serve as a kind of laboratory in which he can experiment mainly with the building of dramatic tension in music in connection with the text’s dramatic content. In his fourth book of madrigals (1603), he experiments with extremes of form and expressive resources of this small genre, bringing himself into conflict with conservative music theorists of his day. This may be one reason why his fifth book of madrigals appeared soon thereafter (1605). The foreword to that volume contains an answer to his critics. He wrote: “…believe me, there are also other rules for handling dissonance… and the modern composer is working on the foundation of truth…live happily.” The following compositions from that collection give a certain explanation. The last seven madrigals in book five have an independent thoroughbass part, and modo rapressentativo appears in them, i.e. solo passages in which the solo singer individually portrays the feelings and experiences of a particular person. Here, finally, we can speak definitively of a composition with a Baroque structure.

By the time Monteverdi published his sixth book of madrigals (1614), he was the maestro di capella at St Mark’s in Venice. Here, all of the compositions have basso continuo accompaniments, and an alternation between solo parts and the whole ensemble appears with increasing frequency. Formally speaking, the five-voice madrigal gradually gives way to the emergent Baroque cantata. The seventh book (1619) is subtitled concerto, and in it we mostly find secular solo and ensemble compositions with basso continuo accompaniment, sometimes supplemented by two solo violin parts. We no longer find the madrigal in its late-Renaissance form. In the eighth and probably best known book of madrigals (Madrigali guerrieri ed amorosi, 1638), Monteverdi documents the development of his compositional style in Baroque forms. This is an extensive collection of diverse compositions ranging from solo laments to vast eight-voice compositions with instrumental accompaniment.

Piagn’e sospira is the last number in the fourth book of madrigals (1603). While the composer agreed with the publisher to begin his collections with the “hits” of the day, the collections often end with unconventional compositions or pieces to which the composer had devoted special care. That is definitely the case here. In the context of Monteverdi’s music and of its period, this chromatic madrigal is absolutely exceptional. No other madrigalists come close to achieving the scope of the five-part imitation with three themes that Monteverdi unfolds over sixty bars at a slow tempo.

The five-voice madrigal Troppo ben puo is one of the seven pieces mentioned above from book five (1605) that now have an independent basso continuo part. It is surprising above all for its wonderfully constructed harmonic gradations and its parallel portrayals of the two opposing aspects of textual content. The form alternates between a solo soprano arietto and five-voice imitation. Similar in form is the madrigal Qui rise o Tirsi, which is found in the sixth book of madrigals from 1614. Here, the five-voice parts serve as a unifying refrain interspersed with solo entrances, duets, and three-voice imitation. Monteverdi now exhibits the tone painting stereotypes that gradually evolve into Baroque gesture and symbolism. Laughter and joking are portrayed by light dotted figures, the word “ornare” (to ornament) is illustrated by richly melismatic ornamentation, etc. From the seventh book (1619) is the soprano duet Chiome d’oro, in which playful strophes are interspersed with violin ritornellos and basso ostinato. He used the same musical material later in his famous psalm setting Beatus vir I (Selva morale e spirituale, 1640).

The madrigal Altri canti di Marte introduces part two of the eighth book of madrigals, Madrigals of Love. The sonnet upon which it is based mirrors the opening madrigal of part one. In part one, we hear: “while others sing of love, I sing of war”, but here we have the opposite: “while others sing of war, I sing of love”. Love and war are intertwined in this part. The snares of enemies are compared to the snares of love, and the conquering of cities to the gallant conquest of women’s hearts. In the midst of the Thirty Years’ War, this rather makes the impression of an attempt to escape from cruel reality, to shut oneself off in palace gardens away from the evil world, and to illustrate war in only an attractive way.

In the lengthy madrigal Hor ch’el ciel e la terra, Monteverdi returns to Petrarch. His marvellous musical setting of the beautiful sonnet elevates human feelings to the realm of the sacred. Tone painting that is nearly miraculous at times, harmonic inventiveness, and mastery of the handling of vocal lines are what make this madrigal special. Experts call its final 22 bars the best music ever written in the history of the madrigal and yet another of the many moments when Monteverdi’s touch reached the eternal on his journey through the Baroque world. 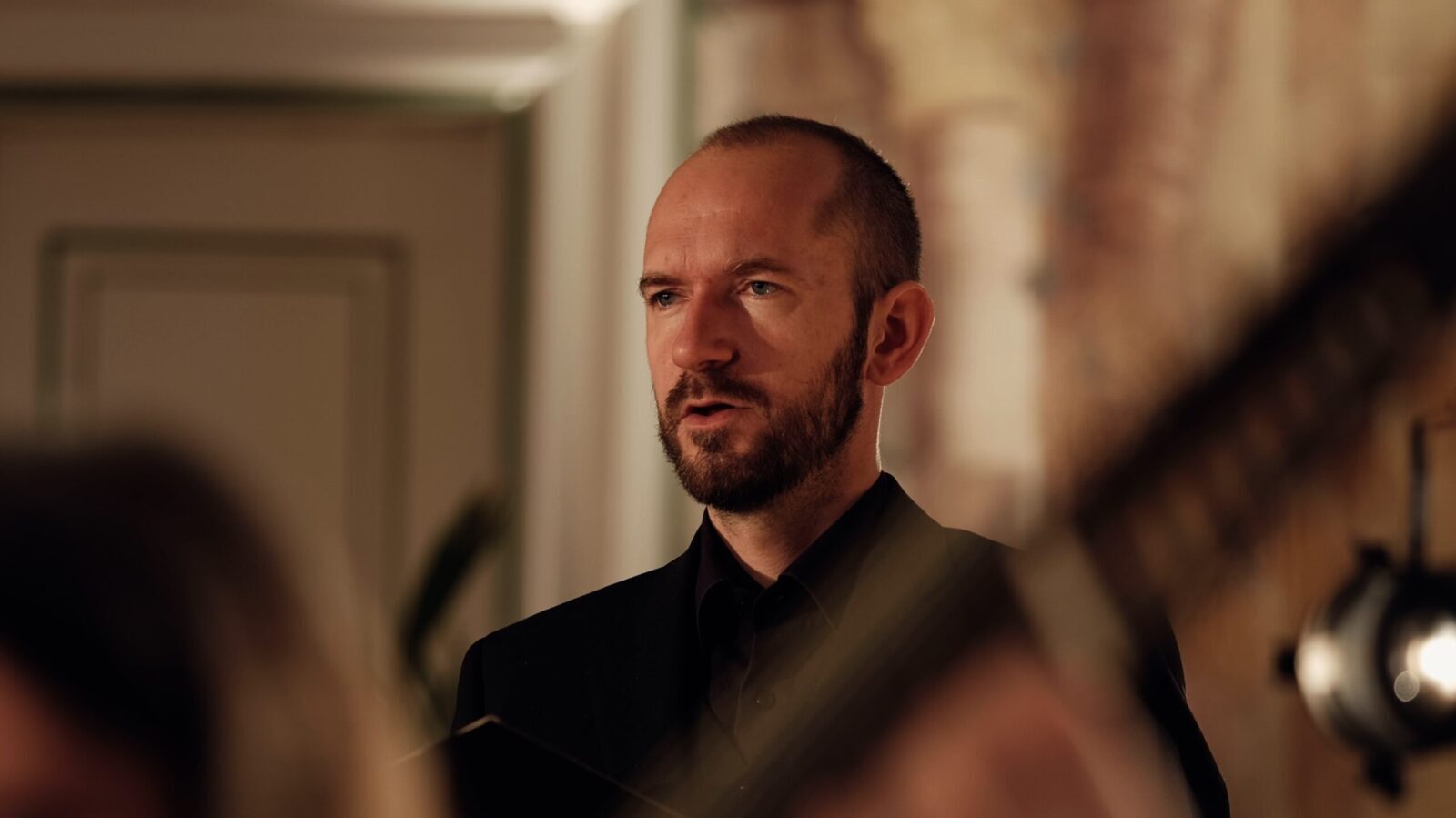 Let others sing of Mars and of the daring attacks
and honourable enterprises
undertaken by his troops,
of their bloody victories and clashes,
of the triumphs of fierce and cruel death.

I sing, Cupid, of this warrior maid of yours,
of the many mortal insults I have had to endure,
of being conquered by a look,
taken prisoner by her tresses:
a wretched tale, but a true one.

Two beautiful eyes
were the weapons whose blows
have wounded and felled me,
and my stricken heart
has long shed bitter tears in place of blood.

You, by whose valour my undefeated enemy
won both palms and pride from me,
having given death to my heart,
give life to my song.

This tyrannical Love is all too strong:
even he who despises it
is unable to flee from it.
At times, when I think of how it burns and stings,
I say: – Ah, foolish heart,
what are you doing? Don’t long for it!
Run away, that it may never catch you –.
But then, love hits me, so sweet and flattering
that I say: – Ah, silly heart,
why did you ever run from it?
Catch it, instead, that Love may never leave you.

Love, what am I to do,
if it avails me nothing to love
with unsullied constancy?
I do not covet my servitude,
weeping night and day
for one who does not believe me.

And since a loving thought
cannot be seen by the human eye,
why must a faithful lover
languish in vain?

I did understand that
the heart can oft be read in the brow;
but then, why does my inner woe
not show on my afflicted face?

Most unjust King
why do you not reveal true constancy?
Why do you allow to perish
words, looks and sighs, that you know to be true?

O how pure, Love, sweet and sure,
could the heart but show itself !
Merciless lady,
could not thereafter suffer another to die.

Is there then under Heaven
no true sign of a constant soul?
Ah fate, ah pain, ah woe!
Believe me or not, I want to give me peace.

Golden tresses, oh so precious,
you bind me in a thousand ways
whether coiled or flowing freely.

Small, white matching pearls,
when the roses that conceal you
reveal you, you wound me.

Bright stars that shine
with such beauty and charm,
when you laugh you torture me.

Precious, seductive
coral lips I love,
when you speak I am blessed.

Here laughed, o Thyrsis, and here gazed
on me fair Chloris with her two loving stars.
Here to crown my brow, she gathered
the prettiest flowers in her lap as I piped.
O happy memory, o joyous day.

Here her angelic voice and the words
with which she tamed the proudest bulls;
here I saw Graces and cupids playing
as she gathered up her golden tresses.
O happy memory, o joyous day.

Here she sat with me, and here she put
her dear arm around me and, gently
clasping my hand, captured my soul.
Here she wounded me with a kiss, and
tinged my face with a soft crimson blush.
O happy memory, o joyous day.

She weeps and sighs;
and when the sheep abandon
the warm rays, resting in the gentle shade,
on the bark of pines or beeches
she wrote the beloved name in a thousand ways;
and carved in hard bark the deep offenses
and the many twists of her fortune;

and then, reading her own messages again
she watered his vermilion cheeks with tears.

Now that the sky and the earth
and the wind are silent
and the wild creatures and the birds
are reined in sleep,
Night leads its starry chariot in its round,
and the sea without a wave lies in its bed,

I look, think, burn, weep: she who destroys me
is always before my eyes to my sweet distress:
war is my state, filled with grief and anger,
and only in thinking of her do I find peace.

So from one pure living fountain
flow the sweet and bitter which I drink:
one hand alone heals me and pierces me:

and so that my ordeal may not reach haven,
I am born and die a thousand times a day,
I am so far from my salvation.