For the sixth time, Collegium 1704 and Collegium Vocale 1704 under the direction of conductor Václav Luks will appear at the Salzburger Festspiele. The concert takes place on 23 July 2022 at 6 pm in the Mozarteum’s Great Hall. After works by Bach, Biber, Monteverdi, Stradella, and Zelenka, the ensemble will present a masterpiece by Josef Mysliveček in a Salzburg premiere. Mysliveček’s oratorio Abramo ed Isacco (Abraham and Isaac) will be performed with an outstanding international cast of soloists, including Norwegian soprano Mari Eriksmoen (Isacco), French tenor Mathias Vidal (Abramo), Irish mezzo-soprano Paula Murrihy (Sara), German soprano Nikola Hillebrand (Angelo), and her compatriot, baritone Matthias Winckhler (Gamari).

Václav Luks, conductor and artistic director of the orchestra, comments on the performance: “I am delighted that after a number of performances with world repertoire, we have managed to introduce a purely Czech programme into the Salzburg Festival’s dramaturgy. The fact that Josef Mysliveček’s most famous oratorio will be performed is also of special significance in relation to the planned premiere of Il Boemo, a film about the life of the composer which was made in close cooperation with Collegium 1704.”

The oratorio Abramo ed Isacco (Abraham and Isaac), originally titled Isacco, figura del redentore (Isaac, figure of the saviour), is Mysliveček’s last oratorio and represents one of the absolute highlights of his entire oeuvre. It premiered in Florence in 1776 and the following year was performed in Munich, at the court of the music-loving Elector Maximilian III. Joseph. At the Salzburg Festival, it will be presented as part of a concert series entitled Ouverture spirituelle.

According to surviving documentation, Mysliveček composed eight oratorios over a period of seven years; complete scores are available for only four of them. Collegium 1704 has so far performed the Easter oratorio La Passione di Gesù Cristo to great acclaim, as part of the Prague Spring Festival in 2013.

Collegium 1704 conductor and artistic director Václav Luks received the Order of Arts and Letters (Ordre des Arts et des Lettres) with the rank of Knight from Ambassador Alexis Dutertre during a ceremony at the French Embassy in Prague on 21 June 2022. The Order is conferred by the French Minister for Culture for distinguished services in the field of culture, arts, and literature.

Václav Luks has a number of unique achievements in the interpretation of French musical repertoire. For instance, with Collegium 1704, he made the second-ever complete recording of Rameau’s opera Les Boréades, which won the prestigious awards Trophées 2021 and Edison 2021 for the Opera Recording of the Year.

In the past, the Order of Arts and Letters has been conferred on a number of prominent personalities who connect Czech and French culture, such as mezzo-soprano Magdalena Kožená, composer Petr Eben, director Jiří Menzel, and former president and playwright Václav Havel. More recent recipients include photographer Libuše Jarcovjáková, director Andrea Sedláčková, and illustrator Lucie Lomová. 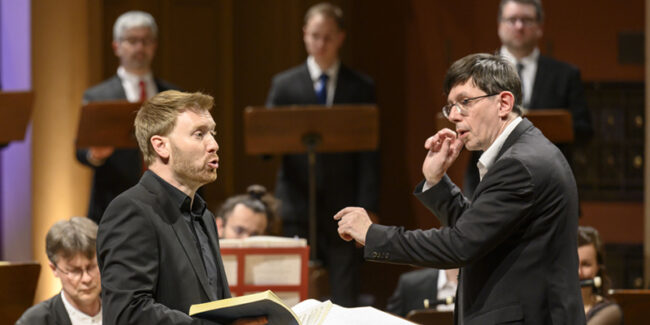 In the upcoming season, Collegium 1704 continues the project “Discover Czech Illustrators”. In the brochure, in concert programmes, on posters and online banners, we will be encountering the works of an artist whose name is mostly connected to theatre productions: Matěj Forman. Collegium 1704 is happy to introduce him also as an illustrator who is able to capture the fragility, poetry, and fullness of life.

The project which joins baroque music and contemporary visual arts was launched in Season 2020/21 by collaboration with outstanding illustrator and designer Michal Bačák. The first visuals featured one of his most famous illustrations, Pheasant at Stromovka, and the collaboration continued in Season 2021/22 by pieces created especially for Collegium 1704: Dahliosauri, Apollo and Daphne (presented during Designblok in Prague), and Orpheus. The Spring part of the season was accompanied by Bačák’s flower illustrations.

Thanks to the concert in support of Ukraine, Chiaroscuro veneziano (held on 22 March at the Rudolfinum in Prague and on 23 March in Annenkirche, Dresden), we managed to contribute 250,000 CZK to the SOS Ukraine fundraiser of the Czech non-profit organization People in Need. Thanks to all made a donation and supported the venture! 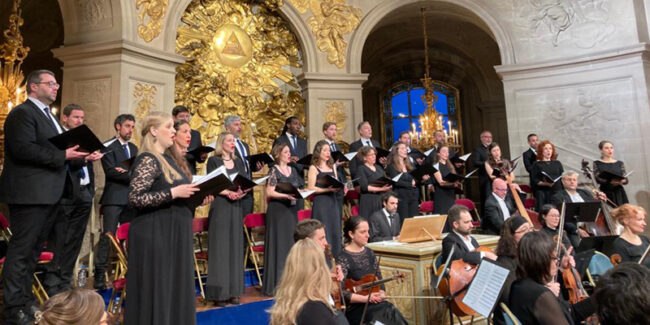 On 10 March 2022, Collegium 1704 & Collegium Vocale 1704 together with Ensemble Pygmalion performed in a concert that took place as part of EU leaders’ summit in Versailles.

The concert, conducted by Václav Luks and Raphaël Pichon, opened with And the Glory of the Lord from Handel’s Messiah, followed by Zelenka’s Sepulto Domino, an instrumental passage from Rameau’s Les Boréades, and Dona nobis pacem from Bach’s B Minor Mass. Ukrainian language was also heard at the concert – the audience, consisting of the participants of the summit and media representatives, listened to the composition Prayer by the late Ukrainian composer Hanna Havrylets. The Ukrainian national anthem brought the concert to a close.

The main issue of the summit was the dramatic situation in Ukraine. The summit was organized by the French president Emmanuel Macron as the head of the country presiding recently the EU Council.

On 9 March 2022, we celebrated the 285th anniversary of the birth of the composer Josef Mysliveček. The launch of the unpatientely expected teaser to the movie Il Boemo with the famous Czech actor Vojtěch Dyk as Mysliveček has been postponed due to the situation in Ukraine. The premiere of the film will take place in the second half of 2022.

However, we are inviting you to watch the documentary Confession of the Vanished (2015), where director Petr Václav follows Collegium 1704, Václav Luks and selected soloists rehearsing the opera Olimpiade, while trying to discover the reasons of Mysliveček´s success and the nature of his talent.

In the season 2022 of the chamber concert series of Collegium Vocale 1704, we would like to invite you again to the Open rehearsals, where you can experience the final stage of rehearsing and preparations for the concert. Open rehearsals take place the day before the concert, the upcoming one is on Wednesday 20 April 2022 from 2 to 4 pm in Vzlet.

On 5 and 6 February 2022, the two premieres of the opera Alcina by G. F. Händel took place in Janáček Theatre Brno, performed by Collegium 1704 & Collegium Vocale 1704 conducted by Václav Luks. The title role of Alcina was presented in two alternations: Pavla Vykopalová from National Theatre Brno and Canadian soprano Karina Gauvin, who performed with Collegium 1704 also at the Missa 1724 at the Rudolfinum on 15 February 2022. Other roles are performed by Kangmin Justin Kim, Mirella Hagen, Krystian Adam, Václava Krejčí Housková, Monika Jägerová, Tomáš Král and others.

The opera production follows the successful and acclaimed performance of Vivaldi´s Arsilda at the Slovakian national theatre in Bratislava in 2017. Koproducers are similarly Opéra Royal de Versailles and Théâtre de Caen. In Brno, there are three performances coming on 12, 13 and 18 February followed by three shows in Versailles on 11, 12 and 13 March and two in Caen on 5 and 6 May 2022.

What is the biggest challenge for the role of Alcina? What emotions does the character go through? How does the singer feel working with the director Jiří Heřman? You will find out from the interview with the Canadian soprano Karina Gauvin, that is going to perform Alcina.

“In singer´s life, there are many challenges – we live every day knowing, that our instrument lives in our body all the time. When something is not right, emotionally, physically or mentally, it could be difficult to focus on the voice. On the other hand, sometimes, when everything goes wrong, singing could be an ally and friend.” This is Karina Gauvin´s answer to the question, what is the singer´s biggest challenge, in an interview for Harmonie magazine from June 2021 (published in the Czech language).

Conductor Václav Luks speaks about the musical preparations of the opera in an interview for Harmonie magazine from February 2022. “It is necessary to ask, what was the autor´s message and what emotions did he intend to rise in his spectators and try to achieve a similar effect with today´s audience.  Our possibilities are unlimited without the need to cripple the piece itself.”

What is the central idea of Brno production of Alcina? It is the fatal relationship – love, answers the stage director Jiří Heřman.

Opera event of the year – that is the description of the new production of Alcina from the reporter in the Czech TV. Visit one of the first stage rehearsals!

The recording of Collegium 1704 won the price of Holland music critics Edison Klassiek 2021 in the category of opera. The tripple CD Les Boréades by J.-Ph. Rameau was recorded at the beginning of 2020 in the Opéra Royal in Versailles and it was published by Château de Versailles Spectacles. It is only the second complete recording of this monumental piece in history – the first one was issued in the 1980s and conducted by Sir John Eliot Gardiner.

Edison Klassiek is being awarded annually since 1960 and it is the most prestigious Holland award reflecting the achievements in the field of classical music. Members of the jury – journalists and promoters – appreciated at the Les Boréades the beauty of the sound of the orchestra and the performance of the soloists, they also highlighted the unique and inspiring energy of Václav Luks.

The other holders of the 2021 awards are for example Norwegian soprano Lise Davidsen with London Philharmonic Orchestra for the CD with music by Beethoven, Verdi, and Wagner, in two categories succeded Italian orchestra Il Giardino Armonico.